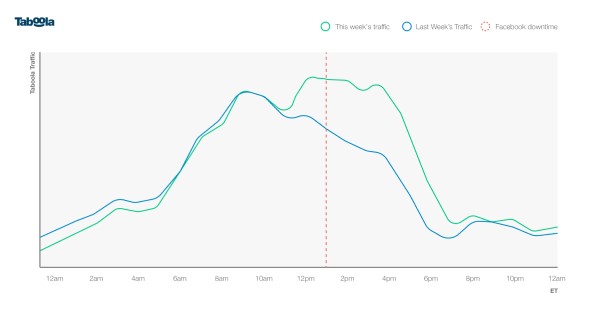 One person’s problem is another’s opportunity – and some of the social network’s rivals for ad dollars have been quick to jump on its outage to stress why brands should be spreading their media investment more widely.

Traffic flows to the open web

“The open web and the premium publishers that make up this ecosystem offer a great way to diversify your digital advertising strategy and safeguard your budget,” said James Milne, Managing Director, Northern Europe at Outbrain.

With Facebook, WhatsApp and Instagram all out of action for six hours, Berlin-based marketing agency ABCD Agency calculated that:

Coming on top of recent problems, including admission of privacy and measurement issues and a series of damaging reports from the Wall Street Journal, the latest setback adds to the sense of a platform under siege.

Facebook has managed to shrug off such controversies in the past, but Axios suggests it is now facing an existential crisis: its platform competitors aren’t under the same regulatory cosh and have fast-growing user bases while Apple’s privacy changes hit it in its advertising pocket in a way that doesn’t affect Google or Amazon.