As some countries begin to show some success in dealing with COVID-19, individuals in China are once again considering the possibility of resuming travel in the near future.

Data analysis from travel data provider ADARA shows that flight searches to and within China from all over the world reached their highest point in June 2020, since the start of the year. This extreme spike of activity (around 26 June) likely coincided with a limited resumption of international flights, particularly from the US to mainland China, releasing pent-up demand and perhaps driving a rush to get home.

Restrictions on foreign travellers and quarantines remain in place, and it is unlikely that full resumption of demand will occur anytime soon. However, demand driven primarily by Chinese travellers seems to be strong enough to drive moderate spikes in activity from time to time. 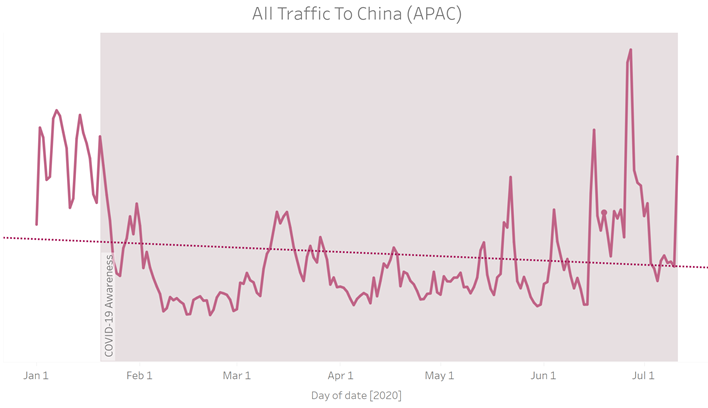 Search and booking data on flights to and within China - all countries, January to July 2020

Based on the above chart the central trend line reveals a downward sloping activity trend since the beginning of the year. However, this has somewhat flattened in June, compared to the period directly before - indicating that the recent pick-up in activity has been substantive enough to offset some of the early losses.

“Rather, they should take into account the small but gradual increase in travel plans, as travellers adapt to the new normal and take added precautions,” he added.

While the initial outlook may appear promising, Chadda noted that it will be useful for travel brands to utilise a logical data-based framework, to enable the analysis of micro-trends as well as personalise consumer targeting.

“Sensitivity to shifts in the market is key - and these shifts can include consumer behaviour as well as pandemic-mandated health initiatives,” he added.

Chadda advocated a detailed data analytics framework to aid marketers in making informed decisions without having to operate on assumptions, even if these assumptions may be widely held and appear logically sound.

“For example, there may be a common assumption that individuals will avoid tourist hotspots due to pandemic fears. However, in actuality, this has proven false,” he said, citing ADARA data that revealed an uptick in bookings of almost 200% to the city of Las Vegas for late summer.