It’s easy to forget that Google is a company run by people, many of them newly remote, rather than just a self-sustaining fact of life – a new interview with the CEO Google and Alphabet, Sundar Pichai, sheds light on the company’s way of coping.

Pichai’s interview with tech site The Verge looked at the hit to advertising revenues during COVID, struggles in the hardware division, and developing Google Meet, the company’s video-conferencing app on Google Meet. It’s worth a read, but here are some highlights:

Though apparently gravity defying in its ascent, COVID-19 has shown that “Google is not immune to the global economy,” Pichai says, noting a rare and quite pronounced dip.

“We generally assume the effects will be there for a while. I think that’s the right way to think about it. As a company, we assume that it’s going to take a while to recover, and [we’re] planning for it that way.” 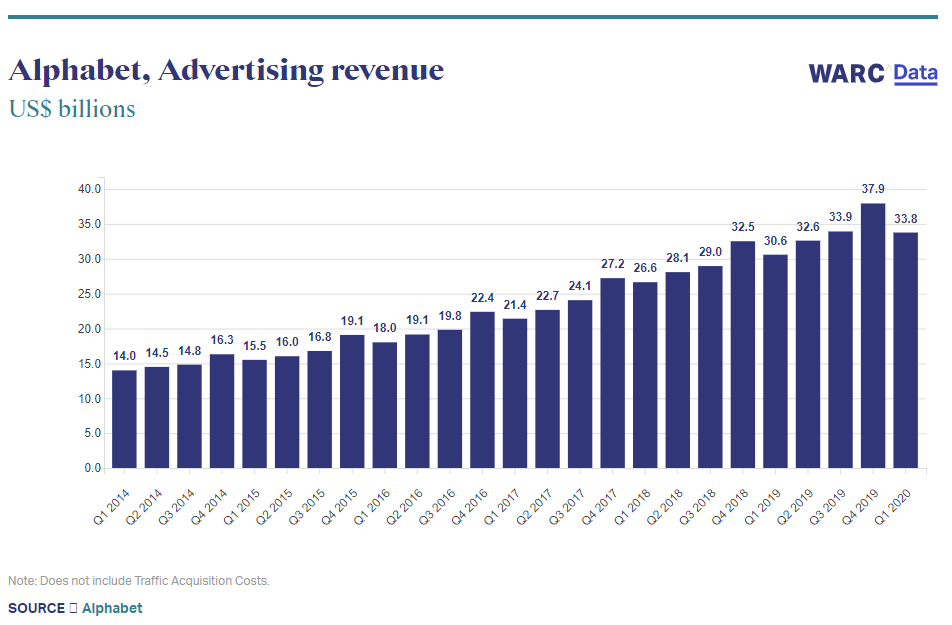 If anything, its huge reach across every sector and at almost every level of business has left it exposed. “As entire sectors have been affected — travel being a particularly severe example of it — we have definitely felt that across the board.”

His observations settles on the sheer speed of search marketing spend decisions – “you can see the economy adapt in real time. And so it’s fascinating to see it that way”, he says. Advertisers “pull back quickly” as they need. The view from the top of Google is a strange and privileged one.

Unsurprisingly, usage of Google Maps is way down. “Obviously, as people aren’t driving around, you clearly saw an impact,” but the last two to three weeks show some changes with “activity back around people trying to find services, what’s around, what’s open,” he explains.

How Google spots the future

“It’s effectively user pattern shifts, trying to understand — is telemedicine a real thing? Does it sustain? Or is it just something people do, and do people revert back to how they do things.

“We’re very interested in how does work culture shift? How does travel and meetings shift for the long run? And hence its impact on things which will do well because of that, and things which will have to adapt.” The company is also keeping a keen eye on education, though early teething problems combined with poor rural connectivity have illuminated perhaps more pressing issues.

“When you look at places in Asia, which have gone through and come back, we do see some shifts in areas, like as people get used to ordering online, some of those effects seem — some of the shift stays.”

Early to disperse, Google doesn’t expect to head back into a full office any time soon. The problem of the variety in Google’s teams means there are huge differences between the at-home abilities of the hardware teams compared to everyone else.

“When the local ordinance allows, I think we’ll probably start with trying to get 10 to 15 percent of the company back, prioritizing people who actually kind of need to be there.”

Pichai makes an interesting point in noting how productivity has suffered in certain parts. If there is a strategy set and people are executing on it, then WFH seems to be working.

“But the next phase, which will kick in is, let’s say you’re designing next year’s products, and you’re in a brainstorming phase, and things are more unstructured. How does that collaboration actually work? That’s a bit hard to understand and do.”

On the separation of brands

Quizzed on the wisdom of retaining all of the different subsidiaries and brads that sit beneath the Alphabet umbrella, Pichai argues that it is all about flexibility.

“I like the fact that there’s structural separation, that the Google management team doesn’t have to sit and think through that breadth, and they can be more focused”, he explains, noting Waymo, the company’s self-driving car subsidiary, and its extremely long-term view. “It allows us to play these different bets with the different characteristics they would need and different time horizons”, he says. “We created that structure to create that flexibility.”

On collaborating with Apple

The joint effort on contact tracing was born of a realisation that the only way to make it easy was to build a system that would apply to all phones, whether they run iOS or Android. Both companies announcing meant they could signal longevity to authorities around the world so that investments could be placed with confidence.

“We both realized, given the public nature of it, given the responsible conversation you need to have with many societal institutions as part of it, it was important that we put it out and shared details, and engaged in a conversation.”

Though COVID is the highest priority, normality is important, too. “I’m making sure that our meetings just have a real sense of normalcy,” Pichai says. At the same time, the difficulties are recognisable: “timelines are hard to plan around.”

“I’m trying to force-block times on the calendar, specifically to read and think. I think it’s hard to do. But actually block the time and do that.”

Sourced from the Verge; additional content by WARC staff