Japanese consumers are slightly more optimistic about the challenges brought about by the ongoing COVID-19 pandemic, according to a recent Mood of Japan survey conducted by McCann Japan.

While the pandemic is being described as “the greatest economic crisis since WWII”, people’s moods seem slightly more optimistic than during the Great East Japan Earthquake in 2011 which resulted in 15,899 deaths in the country. Respondents used words such as “Freedom, Spirited/Healthy, Happiness” to describe their current mood compared to “Anxiety, Freedom, Patience” in the post-3/11 survey. 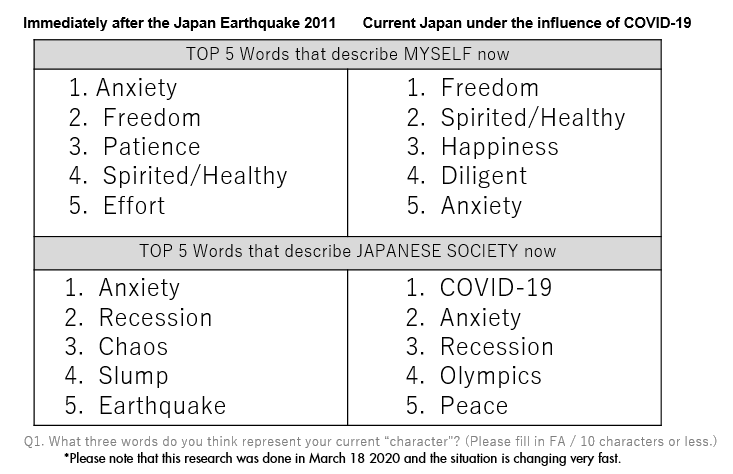 The agency noted that answers may be reflective of the fact that, despite the virus spreading, many people were still not yet directly feeling its impact at the time the survey was conducted (March 18-19, 2020).

While the pandemic has caused great disruption and economic uncertainty, when asked whether they found any positive influence, 43.2% of respondents answered that they did. When asked to freely write specific examples, some of the most frequent answers given were: “improved information literacy”, “work-style reform” and “importance of relationships with people”.

Many companies are encouraging their employees to work from home, but the survey found that only 25% of company employees, civil servants, and freelancers practised and experienced remote work/telework. Moreover, among those that did, 46.6% answered “improved” when asked how their work-life balance changed as a result.

When asked whether companies should practice restraint in their business activities, 61.9% of overall respondents answered it to be “unnecessary”. However, when looking at the result by age group, more teens felt the necessity for restraint, while the feeling that it was unnecessary grew as the age group increased.

In addition, when asked how they viewed society’s overall response to the virus, 36.6% answered “over-reacting”, 29.9% said “appropriate” and 33.5% believed the response “need to be stricter”.

The survey found that 44% of respondents believed that the country should be doing more to mitigate the impact of the virus while 38% believed that current measures were appropriate. Meanwhile, 58% believed brands were reacting to the virus in an appropriate way compared to the 28.3% that think they are not doing enough.

Interestingly, more than half of the respondents (56.1%) felt that Mass Media is overreacting when it comes to how the virus has been covered.