A new report into local and regional European press highlights some of the new fundamentals of the news business, and how to balance advertising and direct reader revenue.

This is according to a new report from Oxford University’s Reuters Institute for the Study of Journalism, which shows a marked trend toward paid strategies. It is based on 20 interviews with managers and editors at eight local and regional newspapers in Finland, France, Germany, and the UK.

The broad findings of the report show that in the last two years all of the news organisations have pivoted their digital strategies away from advertising against broad audience reach and toward building a direct relationship with readers in the form of subscriptions, memberships, access to premium articles, donations, or micropayments. It tracks a trend observable in WARC Data, with internet users across both Europe and the US more willing to pay for online news. 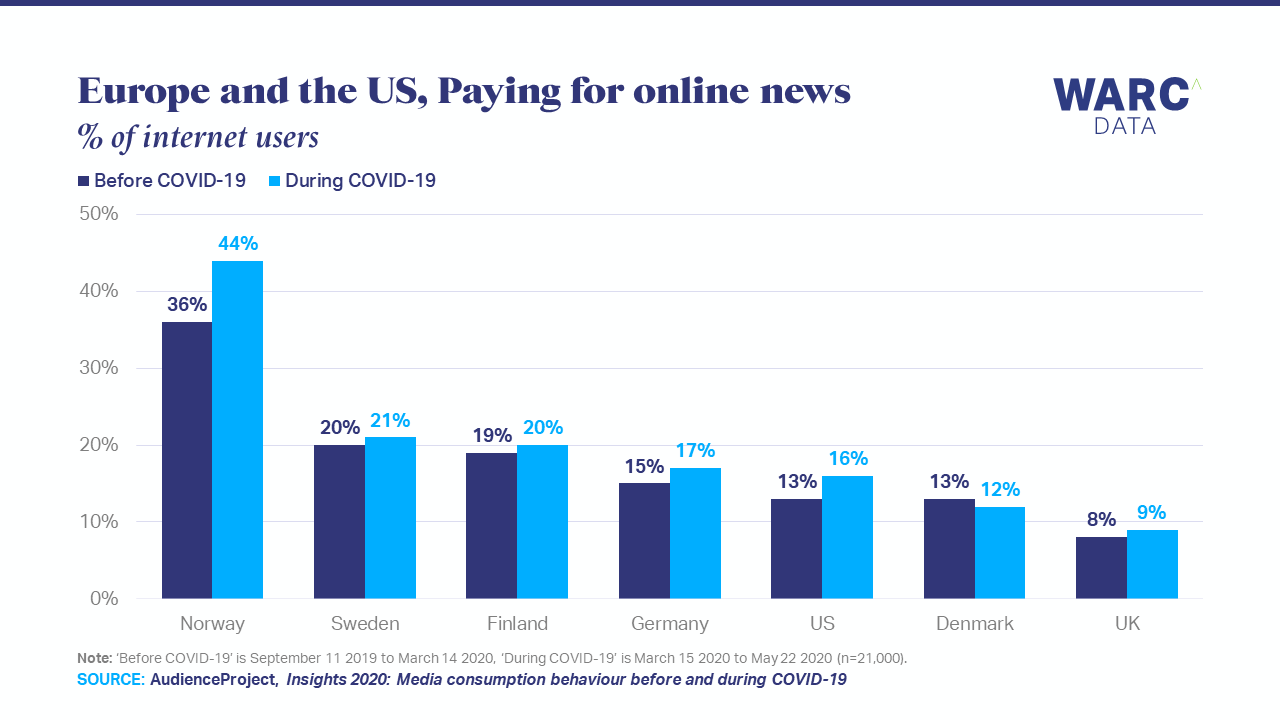 Ultimately, this means that loyalty is becoming crucial, and has seen these papers adding an additional analytical “value-added” layer to their work alongside the typical focus areas of crime, courts, and traffic.

There are implications for platform companies, like Facebook and Google, which have established themselves as crucial avenues for news discovery and traffic.

“Just as Facebook as a company has shifted its focus from public posts to groups and private messaging, the newspapers have scaled back their reliance on the platform for achieving algorithmic reach and instead use it strategically to promote subscriptions, connect with targeted groups, and reach new audiences,” writes the report’s author, Joy Jenkins, an assistant professor at the University of Tennessee, Knoxville’s School of Journalism and Electronic Media.

These trends have accelerated as a result of COVID-19, follow-up interviews reveal. But newspaper representatives remain optimistic, despite the upheaval to their newsroom’s typical functions, that the pivot to paid following a hollowing out of both print and digital advertising revenues is a sound strategy.

Building strong relationships with readers, and owning that valuable first party data, puts local news in a stronger position to come back stronger as a destination for high-quality, high-attention advertising if and when the economic recovery eventually begins. The task until then will be to capitalise on the need for local information at a troubling time.

The report echoes a deeper shift also taking place in national and international titles across the world, with newspapers like the Times of London and New York Times pursuing direct relationship strategies. This new research, however, counters some fears that subscriptions are a consolidation game, though in the local realm these changes are still in their early phases.