The e-sports category continues to attract advertising dollars even if lockdown hasn’t brought the new audience surge it might have hoped for, but mobile gaming has seen big gains during this time, according to a new WARC report.

WARC Global Advertising Trends: Ad opportunities in gaming finds that brand investment (advertising and sponsorship) in e-sports is set to rise 9.9% worldwide to $844m this year, though this is less than half the rate of growth recorded in 2019.

The majority – $615m – is to be invested in the sponsorship of competitors or the tournaments themselves, with a further $229m spent on spot ads during e-sport broadcasts, representative of a 1.7% rise at a time when traditional TV advertising is set to fall by 13.8%.

WARC expects total brand investment to top $1bn within the next two years. 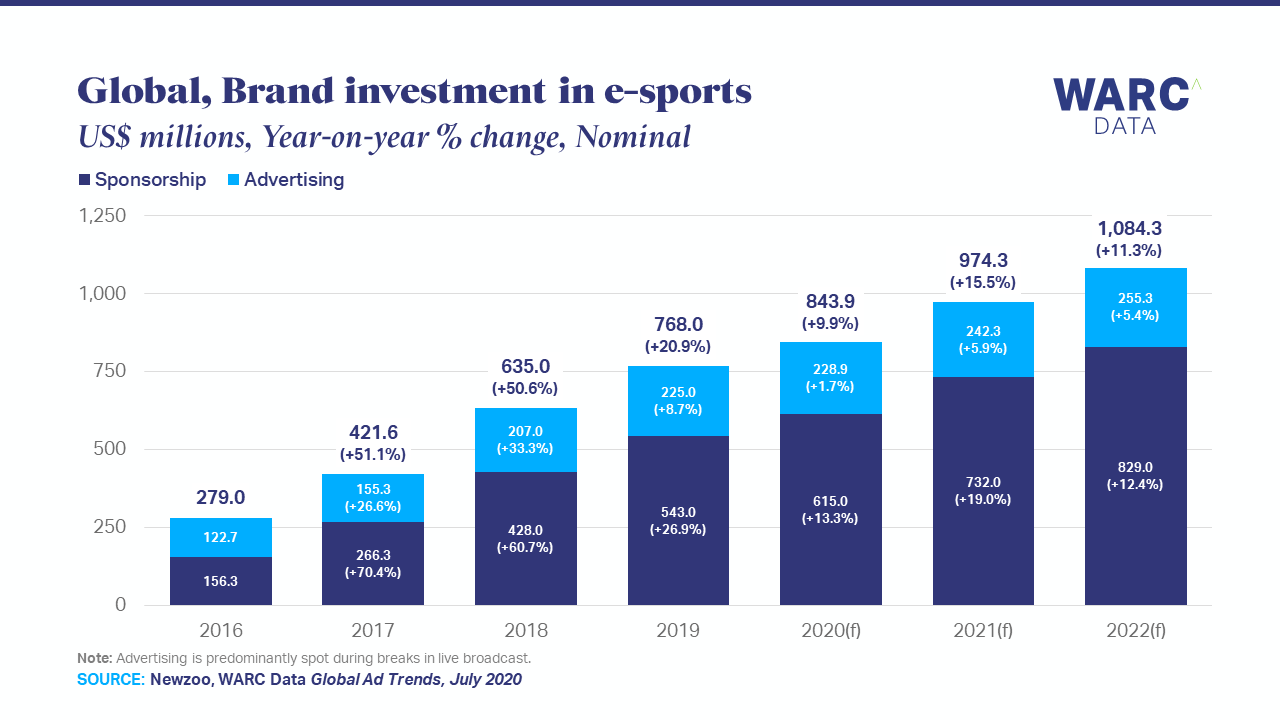 E-sports penetration is approaching one billion viewers worldwide, but new audiences have been hard to win over during lockdown as traditional sports fans haven’t made the switch to virtual formats. Just 3% of adults watched e-sports content for the first time during lockdown, and 55% of all viewers are non-committal.

The greatest proportion of new viewers was to be found in India at 11%, with the US and UK each recording rates of just 1%. Existing audiences instead consolidated: one in ten watched more e-sports content than before, rising to one in four in South Korea (26%) and Indonesia (24%).

Uptake is greatest among Gen Z at one in four (27%) and stands at one in five (20%) among Millennials. Data from Limelight Networks show that Gen Z gamers watch 6 hours and 19 minutes of e-sports content a week on average, over an hour longer than they spend watching traditional sporting content (5:10).

Mobile gaming skyrocketed during lockdown; 2.9bn people (71% of internet users, up from 63% in 2015) now play games on their smartphones, making mobiles the most popular gaming devices in history. Uptake is highest in Asia, with women leading the way.

A full 29% (1.2bn) are mobile-only gamers, per GlobalWebIndex, rising to one in three in Asia Pacific and the Middle East and Africa. Israel (46%), Singapore (44%) and Thailand (42%) record the highest rates.

Mobile gamers skew older than the average and comprise mostly of females (55% vs. 46% for all gamers). They are more casual, with many not regarding themselves as gamers at all: in the US, three in four (77%) women with children that play mobile games do so daily, though only 46% describe themselves as gamers. Data show that these ‘gamer moms’ are more receptive to advertising than the average consumer and are highly influential in purchasing decisions.

Mobile gamers also understand the value exchange of advertising: over half (57%) are fine with viewing advertising if it keeps the game free-to-play, rising to 70% among Americans.

Data show that ads in mobile games have no discernible impact on churn and are more effective than other online formats such as banners and rich media. Yet ads only provide 42 cents in every dollar earned by mobile game publishers, with in-app purchases (IAP) still accounting for the majority of income.

Chinese publishers over index, with two-thirds (65%) of income coming from advertising, while data show that mobile gaming app downloads rose 89% during the early days of lockdown in China. A full 96.8% of Chinese female mobile gamers spent more time playing during lockdown, and 78.0% spent more money in-game than they had before. 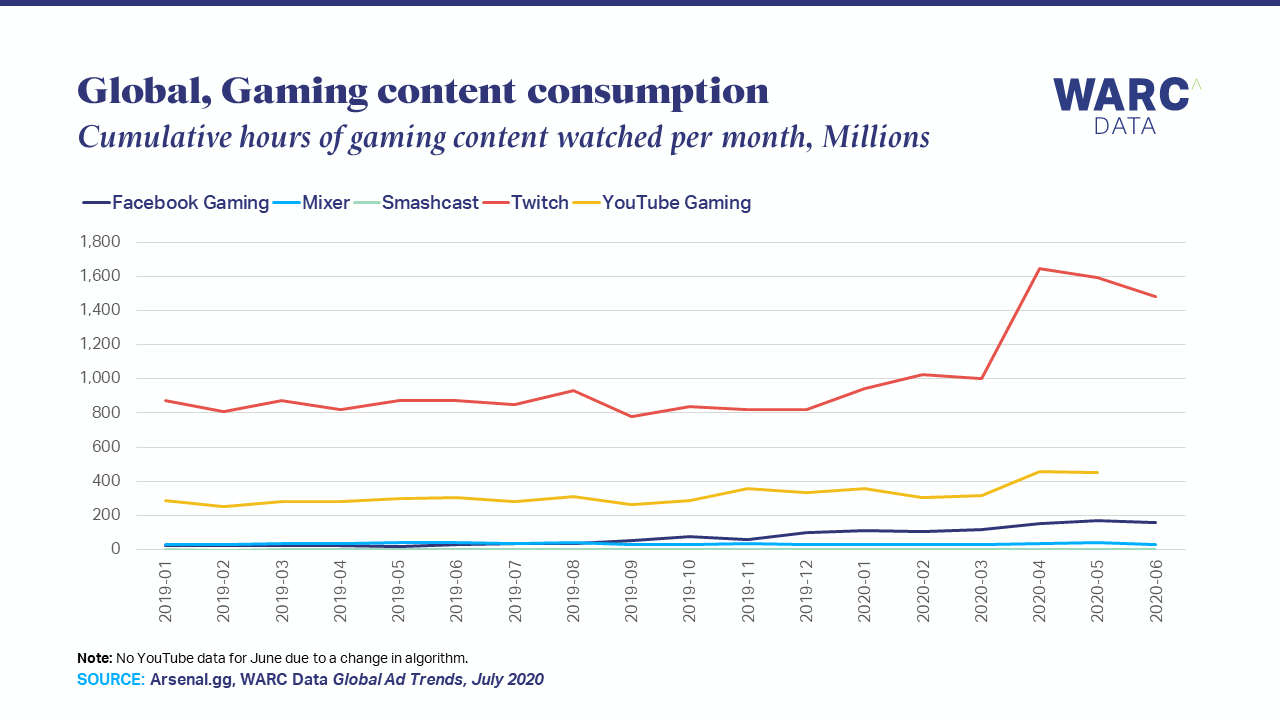 Amazon-owned Twitch was another big winner during lockdown. In April alone, consumption of gaming content on Twitch rose 63.8% from the previous month to top 1.6bn cumulative hours, more than double that of Facebook Gaming, YouTube Gaming, and the now defunct Mixer combined.

The report finds that the viewing of gaming content is eroding the viewing of linear TV among Gen Z. Two in five (41%) 16–24 year-olds have watched a gaming stream in the last month, with a rate of one in three (35%) recorded among Millennials. Penetration is highest in Asia at 38%, with rates close to a third in Latin America (31%), North America (30%) and the Middle East and Africa (30%), and a quarter in Europe (27%).

Data show that for many younger viewers streaming is now the ‘new prime time’. Twitch alone draws a – predominantly Gen Z – audience of 1.9m per day, with viewing concentrated after 7pm.  Two-thirds of 18–25 year-old gamers would rather play video games or watch gaming content than watch TV.

“The gaming content world is evolving quickly,” says James McDonald, Managing Editor, WARC Data, and author of the research. “Streaming is the new prime time for much of Gen Z, and Mixer’s shuttering this month served only to highlight the stranglehold Twitch has on the market. Tencent may yet prove a challenger in the US with Trovo this year, but it has a great deal of catching up to do along with Facebook and YouTube.

“Competitive gaming is big business in Asia – where Tencent is already king – though traditional sports fans in the West are yet to be wooed, with existing audiences instead consolidating during lockdown.

“A great deal of merger and acquisition activity, especially around media rights within e-sports, is expected in the short term as investors vie for control of potential windfalls.”

Global Ad Trends is a bi-monthly report which draws on WARC’s dataset of advertising and media intelligence to take a holistic view on current industry developments. It is part of WARC Data, an independent and objective one-stop online service which features current advertising benchmarks, forecasts, data points and trends in media investment and usage.